I had the opportunity at the end of June to participate as a delegate from California to the Libertarian National Convention in New Orleans. It was a great experience!

Let me start with a little background. I’ve only been active within the Libertarian Party for about 9 months. My involvement goes back to an interview I heard on the Tom Woods Show regarding the formation of the new Mises Caucus of the LP. Caucus founder Michael Heise spoke with Woods about how he was hoping to bring back the excitement he and others felt for the liberty movement during the Ron Paul campaigns but has since waned some. The group he formed focuses on promoting Austrian economics, supporting candidates who have sound economic values, and increasing activism/growing the libertarian base in the process. He recommended to Tom’s audience (who are typically strong free-market Austrians) that they join the Mises Caucus Facebook group and get involved in their county and state parties with an eye toward possibly becoming delegates for the national convention.

So that’s what I did.

I liked the energy that was driving Heise’s call to activism and I can’t disagree with the free market. I began attending Placer County Libertarian meetings and have since been voted in as an at-large member of the board. I connected with the Mises Caucus folks, including the California chapter, and – through their efforts – was made a delegate to the convention. 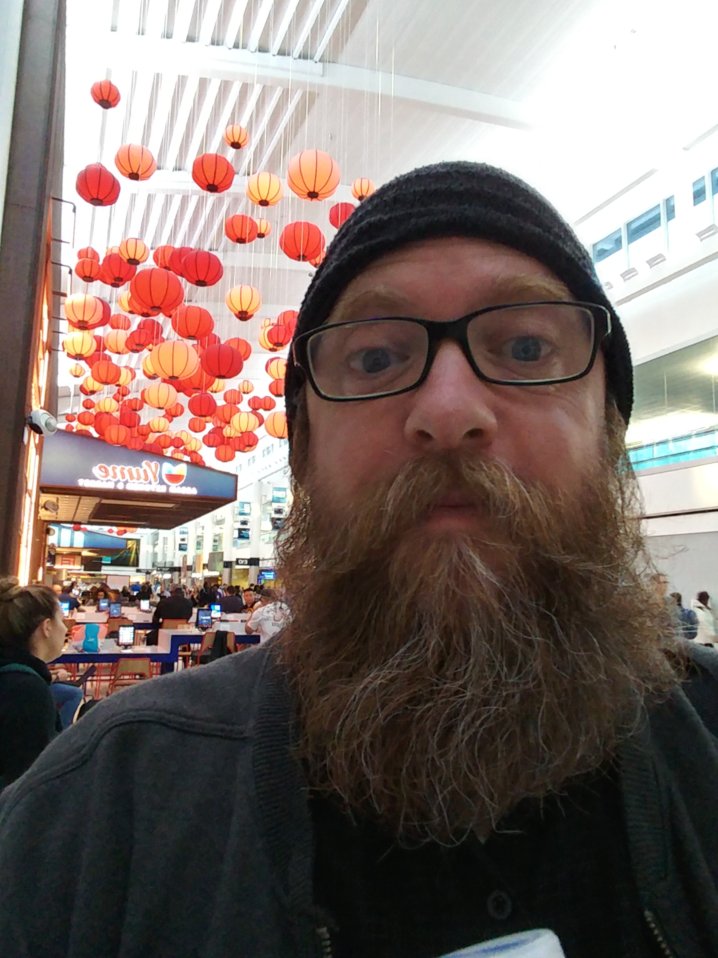 Here I am in the middle of the night at the Houston Airport during a layover. 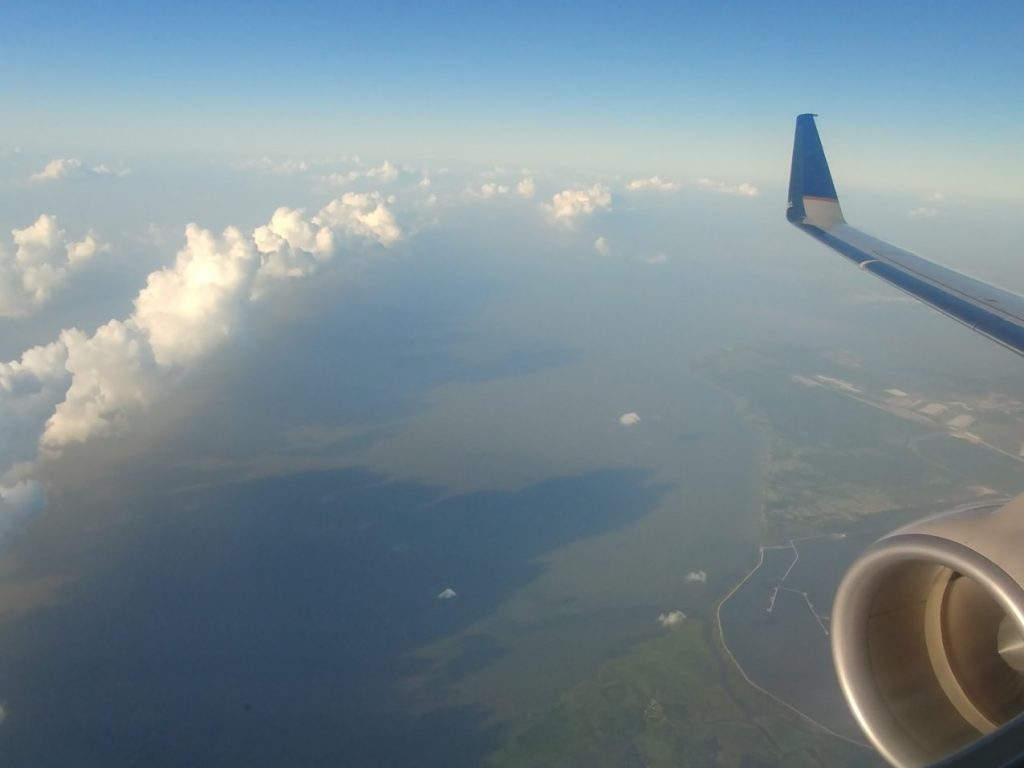 On my way! Flying along the Gulf Coast between Houston and New Orleans. 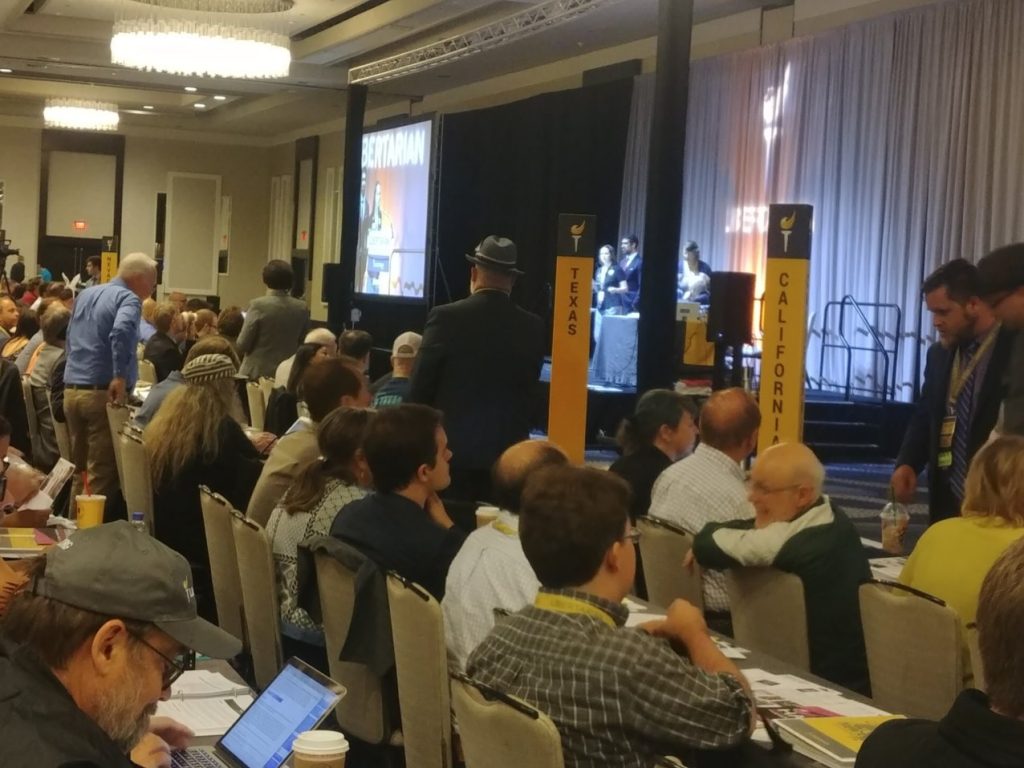 On the convention floor during a vote. 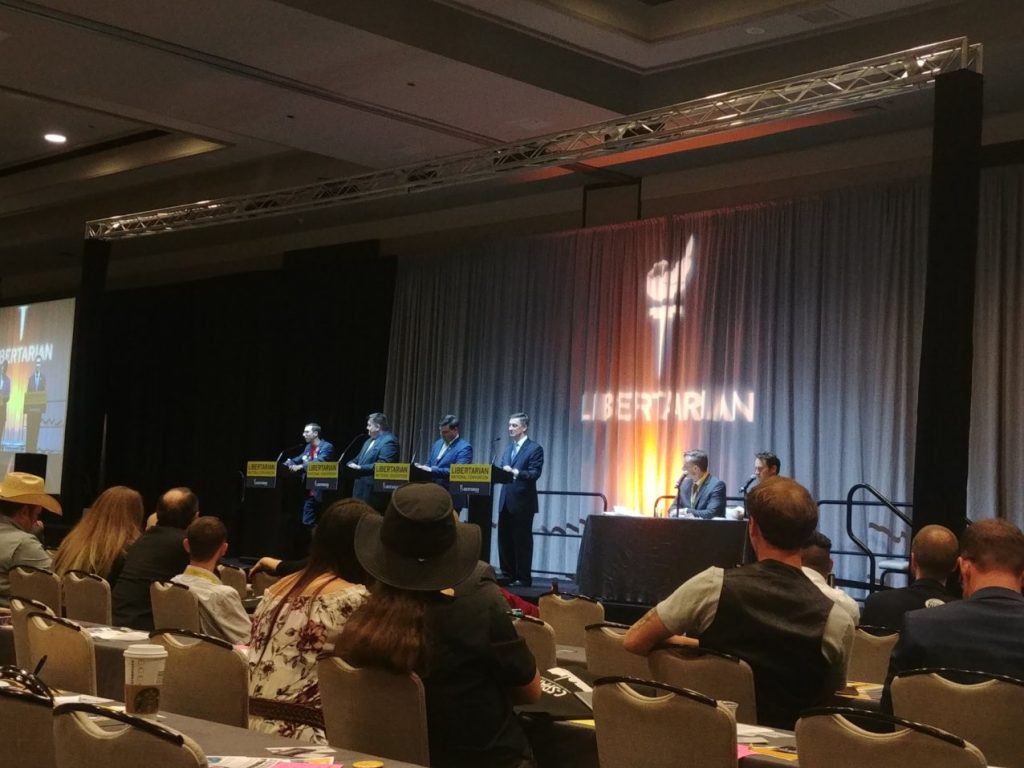 The debate for LNC chair. 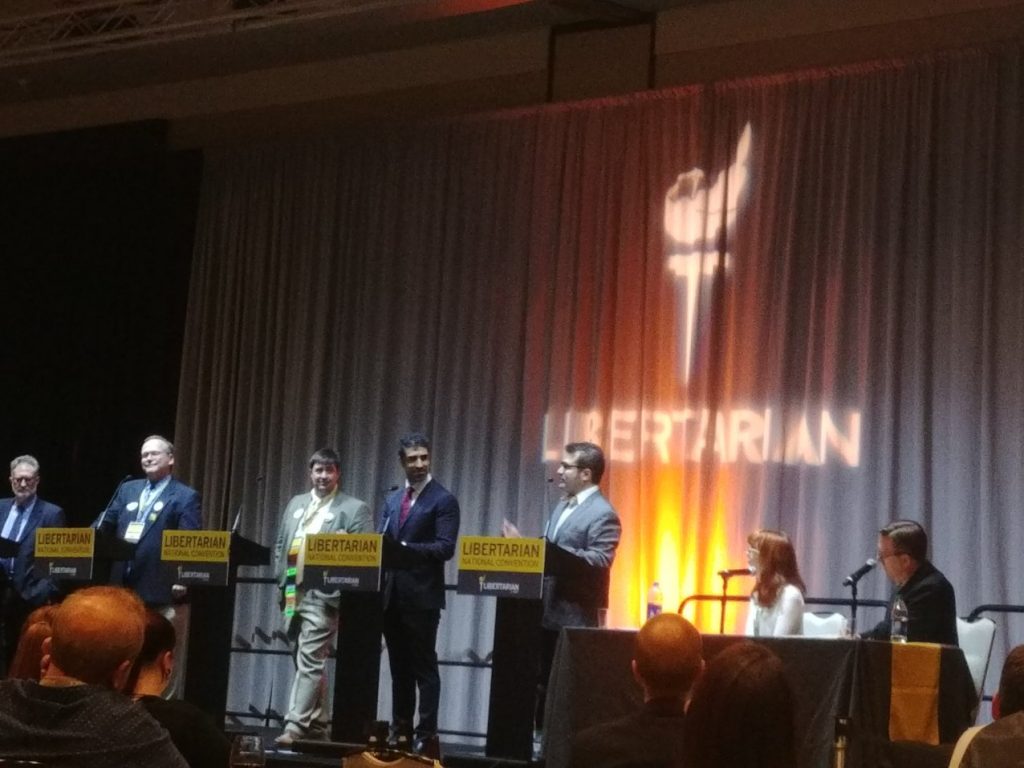 The debate for LNC vice-chair. 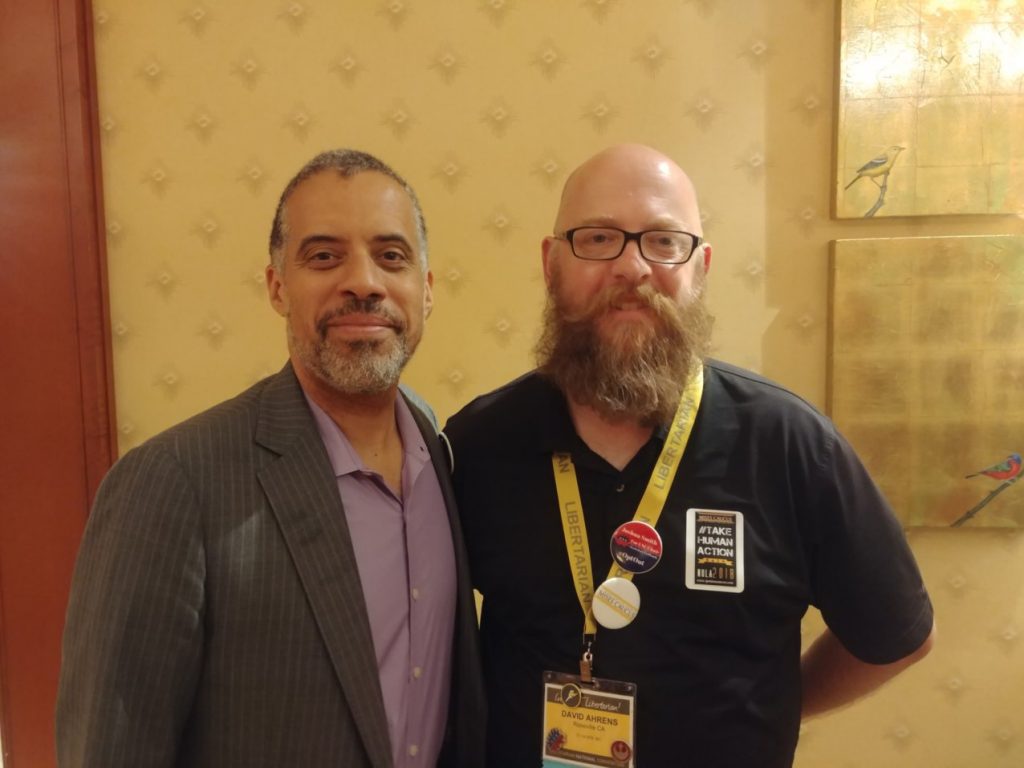 I had a great conversation with New York gubernatorial candidate Larry Sharpe. 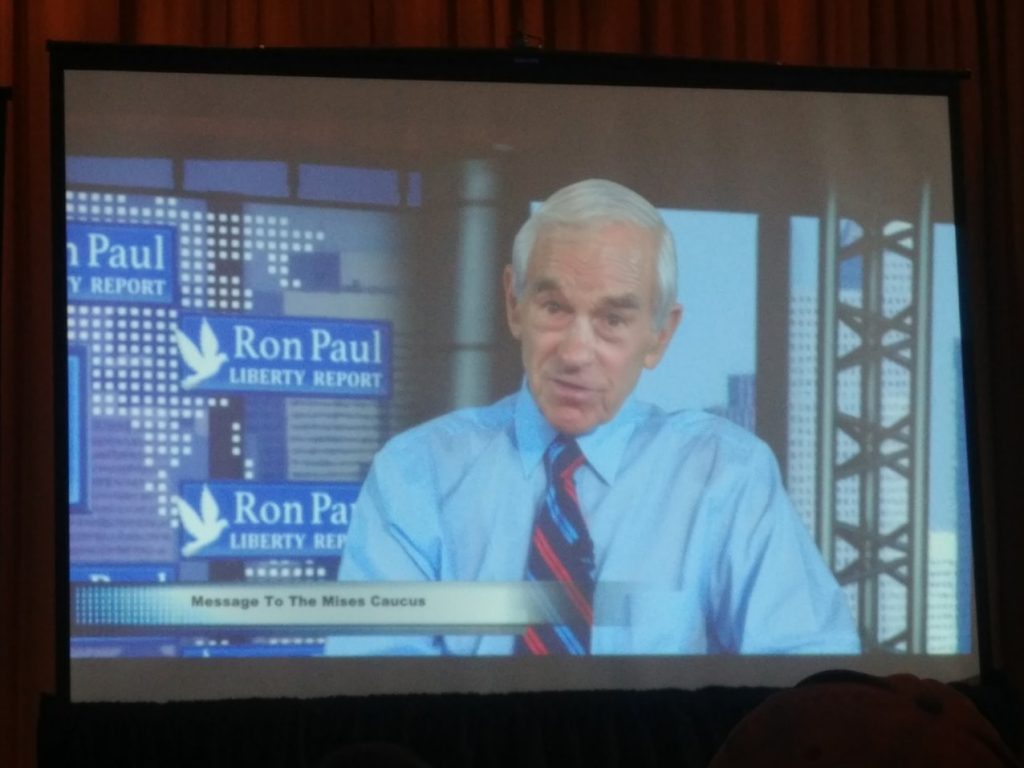 Ron Paul wasn’t able to attend, but recorded a special message for the Mises Caucus. 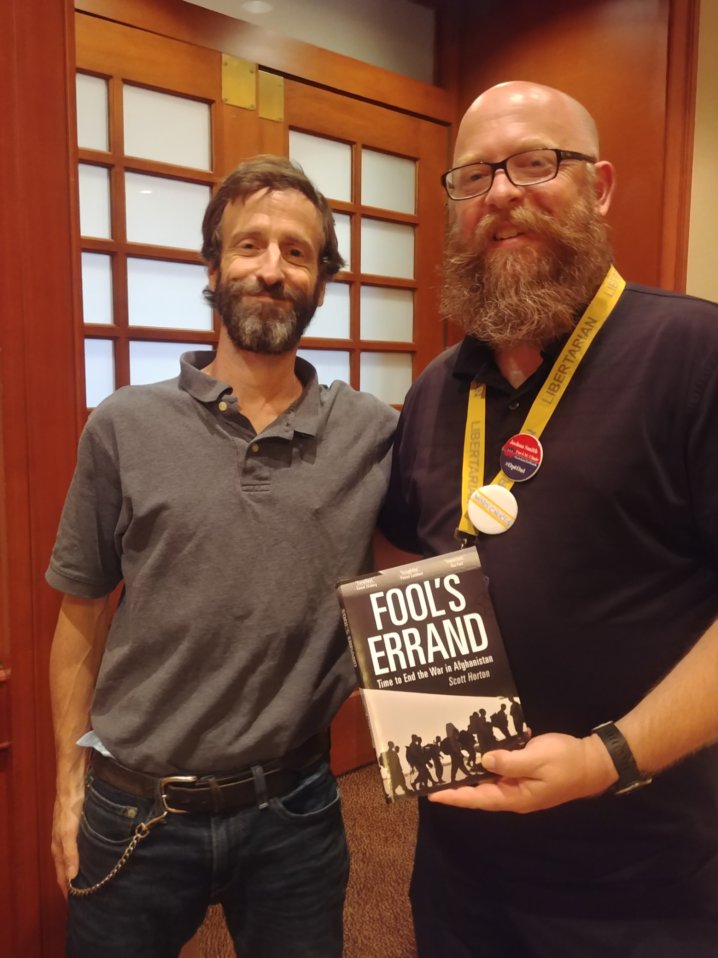 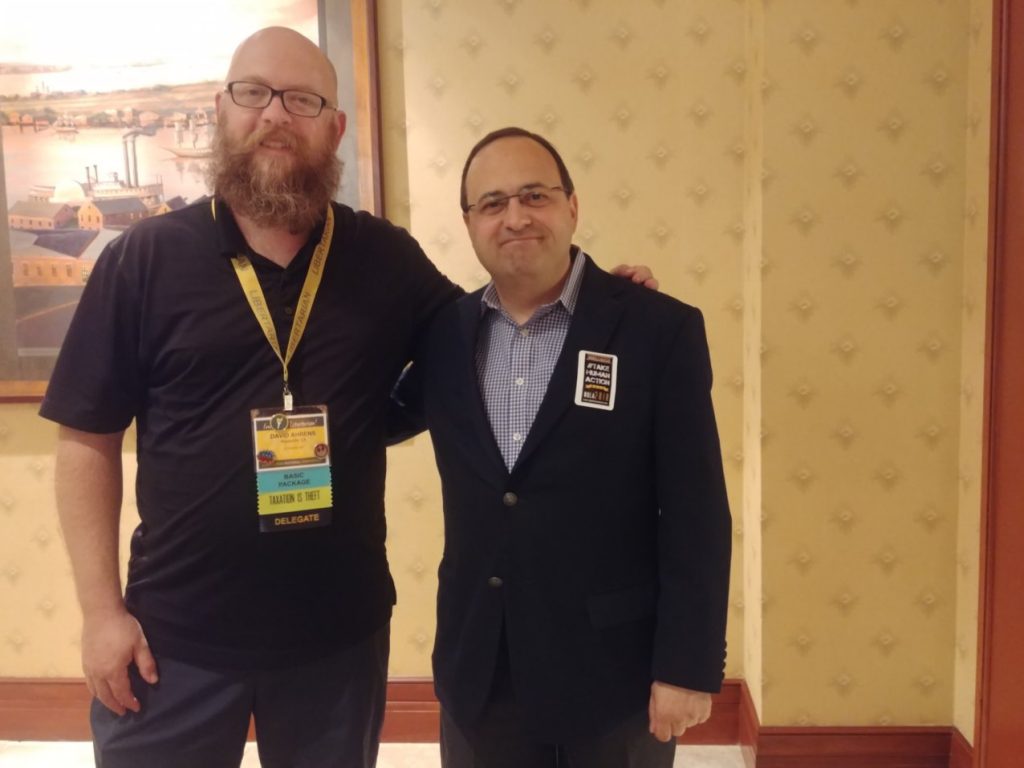 I was happy to get to meet and talk with Tom Woods – particularly since it was the discussion on his show that led to me being at the conference. Tom’s lovely daughter took this photo.

Getting to see the inner workings of a political party up close was very interesting to me. As frustrating as some of the hours of back and forth on the convention floor over very small (sometimes single word) changes to bylaws or resolutions was, I was really captivated by the entire process.

On the first day, prior to official party business beginning, I attended the Take Human Action Bash – a great event put on by the Mises Caucus. There were hundreds of delegates in attendance to hear speeches by Murray Sabrin (running for Senate in New Jersey), Michael Boldin (of the 10th Amendment Center), Alex Merced (vice-chair candidate), Larry Sharpe (New York governor candidate), Joshua Smith (chair candidate), Scott Horton (of antiwar.com), Bob Murphy (author, professor, and co-host of the Contra Krugman podcast), Tom Woods (author and host of the Tom Woods podcast), as well as a performance by Eric July and his band Backwordz. Needless to say, working on about 45 minutes of sleep this was a full day!

The second day began the official business of the convention. Voting on revisions planks of the party platform and bylaws took up the bulk of the day. In the evening were debates for the chair and vice-chair positions. These were interesting. The chair debate was a bit of a circus. Somehow enough delegates supported a member of the Socialist Caucus of the party to get him into the debate. Even after having it (sort of) explained to me, I don’t see how there can be a thing so antithetical to the Non-Aggression Principle and the free market (i.e. basic libertarianism) as a socialist libertarian. It was a joke and I was sad to see his presence take away from what could have been a substantive debate (the socialist stuff as well as his personal attacks on candidate Joshua Smith). Incumbent chair Nicolas Sarwark was the clear winner, primarily as he came off as the grown-up in the room. He went on to win the election the next day. The vice-chair debate was much better. All of the candidates were great and civil. They actually showed camaraderie after months of being together at various state conventions. While I was impressed with all of the candidates, I did feel that Alex Merced won the debate with his positivity, energy, and strong advocacy for outreach. Merced went on to win on the third ballot.

While this was my first adventure with national politics, I don’t intend to end there. I’m already looking forward to the 2020 convention in Austin, TX. All of this plus the nomination of candidates for president and vp will be that much more exciting. I would like to thank those who helped make this trip possible for me by helping to cover my travel expenses. Your generosity is truly appreciated.